The Word of the Week is “Debate!” 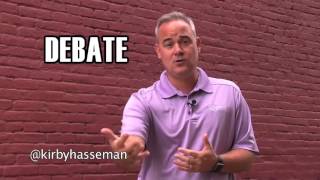 Kirby Hasseman is the CEO of Hasseman Marketing & Communications. Kirby hosts a weekly Web show called Delivering Marketing Joy where he interviews business leaders from around the country. Kirby has published four books. His most recent is “Fan of Happy.” His book, called "Delivering Marketing Joy" is about doing “promo right” and is perfect for people in the industry and customers. He also wrote “Think Big For Small Business” and “Give Your Way to Success. All are available on Amazon.
← 7 Products To help Rock Your Sales Meeting Delivering Marketing Joy episode 107 →